W
hen I first read Dogs, I knew almost instantly that Naoto would be my favorite character. What drew me to her at first, I think, was her fierce personality and stunning fight scenes. However, her actions in the end of the one-shot were what really struck me. Seeing her expose her more sensitive side illustrated Naoto to be far more complex than she initially seemed, and I desired to know more about her and see how she would continue to grow. Moreover, as a young girl still in middle school—still trying to figure out what I wanted to even do with my life—watching Naoto struggle with her own identity was something that resonated in me, so much so that I wanted to see where her journey would take her.

Years later, that journey has not disappointed me. Aside from being part of a compelling plot and cast, Naoto's story is thrilling and suspenseful because of all the odd twists and turns it takes. What makes it even more enjoyable, however, is seeing how she experiences and responds to these events herself. Naoto's character is always evolving, always changing, and seeing her become stronger and wiser only inspires me to never stop growing myself. 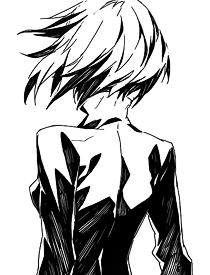 G
oodness, it's been a long time hasn't it? Although it's admittedly been neglected for many years, this site is one of the first shrines I ever created way back in middle school. It's also my first anime/manga fanlisting, and is among the oldest of the fanlistings I still run today, rivaled only by one other.

At first, I was only going to create a shrine as I felt that Dogs was a sleeper series that didn't really get much love or attention. When I saw that the fanlisting wasn't taken, however, I decided to apply for it myself. The fanlisting was approved on October 16th, 2007 by Anime Fanlistings, and was opened in the same month as Excalibur. Since then, it's moved spaces quite a number of times; now that I have my own domain, however, this will hopefully be its final home.

The site's first revamp was in February 2009. Due to real life, I wasn't able to maintain the content and overall site as well as I would have liked over the years. Seven years later, in August 2016, I decided to revamp the site again—or at least get started on it!—as part of the Shrine Revamp 2016 event at Amassment, changing its name to Cradle and Rupture.

W
hen I first opened the site, I titled it Excalibur for... uh, admittedly silly reasons that will not—WILL NOT—be discussed here lest I die from embarrassment. Just know that I thought it was very punny. Hohoho.

Ahem, moving on, I've wanted to rename it for a few years now, but struggled to find a name that I liked. Briefly, I considered "Blade Maiden" at first, but I thought it was too blunt and not very original. I looked up song lyrics, chapter titles of random series and even went as far as perusing old roleplaying threads from ages past. Finally, I turned to poetry, the one source that has yet to fail me. (At this rate my collective is just going to be filled with an obnoxious amount of poetry...)

Vaguely, I remembered a poem that I thought might suit Naoto well. After some searching, I found it: "The Riot Kings (of Apartment F9)" by Jeanann Verlee (read it: here). Although the entire poem is reminiscent of Dogs and the characters in general, the last four verses reminded me a lot of Naoto:

Here we are. The bed we share. It is the dark.
Truths offered in the dark are always ugly.


There are always ghosts where we think there
are none. There are no children. This, too,


is a ghost & we are the ghosts. We cradle each
other & rupture. This ruin is a thing no fists


can answer. My boiling brain is a flood of disease.
It never stops, it can’t. It will always slaughter.

Since I was also rereading the series at the time, the words "cradle... & rupture" made me recall these two pages. In the first image, Naoto seems to be cradling the scar on her chest. In the second, the scar seems to expand, creating a kind of schism in its place that consumes her. The verses combined with the images is what really solidified Cradle and Rupture for me, though I suppose the title may sound a bit strange to others, haha.

Apart from "Cradle and Rupture," another really close contender was "Self/Less." Yes, it was inspired by the 2015 American film of the same name and also by one of the songs off the film's soundtrack. Since it wasn't chosen in the end, "Self/Less" instead became the new name of one of the old essays.

T
his site is part of lost-boy.org.