S
et in a post-apocalyptic world, Dogs takes place in a European city. The inhabitants of this city include humans, mutated humans and genetically modified subjects. Crime and violence are common, along with inhuman scientific experiments.

The history of the city—and the world in general—is not fully elaborated upon. In fact, it is suggested that these historical documents and other records are kept from the public and are under control of the government. However, certain implications are made throughout the story, and important events are also revealed as time goes on.

The following list is not comprehensive; it only presents what events and mysteries are addressed in the beginning of the series.

The city is divided into different layers: the surface, the lower strata and the underground. From the outermost layer to the deepest, they are as follows:
Surface

Sometimes the lower strata is referred to as "the underground"; for the sake of simplicity, however, these terms will not be used interchangeably. 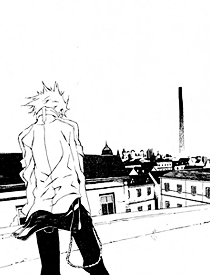 T
he surface or "the above" is the uppermost layer of the city. Presumably, its population mostly consists of humans. Out of the three layers, the surface is perhaps the most regulated and orderly by virtue of having the government and its services located here.

Nevertheless, it still has its fair share of corruption, scandals and illegal activities, mostly due to the number of crime families that reside here. Although they don't play a major role in the story (yet), some members hold grudges against certain protagonists, namely Heine Rammsteiner and Badou Nails, and are seeking vengeance.

In the beginning, the series places a much greater focus on the lower strata and the mysteries and whereabouts of the underground. Later, however, the surface becomes much more significant as certain parties begin to move against one another. 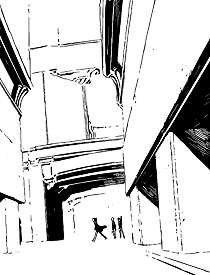 B
eneath the surface is the lower strata, consisting of winding sewers, rundown buildings and slums. The inhabitants of this section of the city include both humans and mutated humans. The latter seem to be far more common here than on the surface due to the prejudice they face because of their twisted appearances.

Also mingled amongst the population are genetically modified subjects, though they seem to be incredibly rare; one would most likely not realize their true nature in a normal situation.

Gang violence and human/mutant trafficking are common in these parts of the city. Police enforcement, while available, is rare, and the law is oftentimes taken into one's own hands. With crime rampant, it goes without saying that life here is hard and precarious. One must learn the ways of the lower strata quickly or be crushed by them. 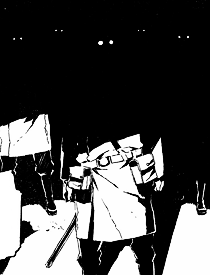 T
here are rumors of a place beneath the city—a place that descends even farther down than the lower strata. These dark depths are referred to as the underground or the "below." So remote from the outside world, one only expects hellish creatures to dwell there and, frankly, such an assumption is not far from the truth.

The entrance to the below is hidden and remains a mystery. Those who ascended from such a place either keep that secret to themselves or have simply forgotten.

Despite what dangers may await them, however, the protagonists of the series hunt for a way into the abyss in the hopes of resolving their own pasts. They do not, however, account for the possibility that the creatures of the underground may reach out to them instead, ascending to the surface to wreak havoc on the world above after what seemed to be years of dormancy. 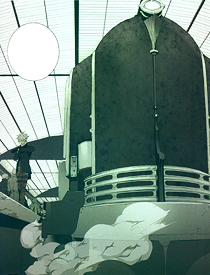 W
ith the exception of the underground, travel between the surface and the lower strata is facilitated primarily by trains and subways. Should the railroad system be disrupted, communication between the different sectors would be incredibly limited, bordering on none. Journeying to either layer would also be difficult... however, it is not completely impossible.

Secret passageways can be used to travel between the surface and the lower strata, so long as one knows where to find them. Sewage ducts and ventilation shafts are examples of such passageways. Although these areas may have seen heavy use in the past during the city's construction, nowadays they are mostly empty.

Later in the series, it is suggested that there are also elevators that can take people up and down the different layers; however, these seem to be only for private and government use.

T
hroughout the story, characters are constantly moving up and down the different layers. Their movements are documented here, along with reasons why.