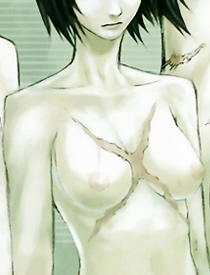 A
ll four of the main protagonists bear scars that are reminiscent of their pasts. In her case, Naoto bears an X-shaped scar on her chest, created when Frühling attempted to kill her when she was a child. Although she was shielded from the blow by those around her, it was enough to scar her and nearly kill her before Fuyumine arrived and took her under his care.

Due to its location on her body, the scar is rather easy to hide with clothing despite its large size. When she is stripped bare, however, it becomes impossible to ignore. For Naoto, the scar serves as a constant reminder of not only her past, but also her ambition in life: to find the "other Naoto," to claim vengeance and to recover her lost memory.

In quiet and more personal moments, Naoto reacts to her old wound with hatred and with a kind of wistfulness as well. As she contemplates her reflection in a mirror, she wears a pensive yet determined expression. Instead of regarding her scar with regret or sorrow, she looks at it with purpose.

What's interesting about this particular moment as well is that Naoto caresses the image of her scar in the mirror instead of the actual scar she bears on her chest. Furthermore, throughout the series, she hardly touches it or makes any sort of gesture to it. There exists a kind of hesitation or a wall between her and the scar she carries. Is that wall created out of hate? Out of fear? It is difficult to say.

Bear in mind, however, that Naoto has been carrying her scar for years. A burden that heavy and that persistent is bound to leave her exhausted. When she was cut, Naoto was scarred not only physically but also mentally.

Later, this scene is revisited, only now with these words accompanying it:

How long do I have to keep on going on living cursing someone?

A
side from being associated with her past and the burden she carries, Naoto's scar is also significant in that it acts as a metaphorical gateway to her heart. The fact that the scar is situated on her chest and not any other body part further suggests this idea.

It goes without saying that her scar is something deeply personal to her. Generally, Naoto is someone who is reluctant to let others in, regardless of how good their intentions may be. However, she does eventually open up to those around her, especially as her journey becomes more perilous. Although most of her relationships develop naturally over time, there are moments when she makes a clear decision to let people into her inner circle. This is accomplished via her scar.

The earliest instance occurs with Nill. After noticing her damaged clothing, Nill takes Naoto aside to repair them. As Naoto undresses, the young angel notices the stray lines of her scar peeking out from beneath her undergarment. With a gentle smile, Naoto reassures Nill that her scar no longer hurts.

As mentioned previously, while her scar may not hurt her anymore physically, it is clear that it still pains her. Even though she may hesitate to fully confess her burdens to Nill, Naoto's tenderness and desire to comfort Nill speaks to her willingness to invite this rather new acquaintance of hers into her life. A similar episode occurs with Granny Liza. When Naoto enters the cafe, Granny Liza surprises her with a sudden makeover. Before Naoto has a chance to respond, the old lady's assistants jump on her and the transformation begins. While undressing her, however, Granny Liza notices Naoto's scar.

Unlike during her previous interaction with Nill, Naoto's expression is solemn as she reassures Granny Liza and gives her permission to continue. Her grave demeanor is most likely due to the fact that, prior to this moment in the cafe, Naoto was finally able to see the face of Frühling, the very person who gave her the scar she bears. With that incident still fresh on her mind, it comes as no surprise that she would regard her scar now with such an expression—one that echoes the one she holds to herself in private.

Nevertheless, Naoto's gesture is still one of welcome. Even though she is troubled by her scar, she displays no signs of discomfort or anxiety. Naoto remains comfortable sharing this part of herself with Granny Liza and Nill, and underlying her actions is an inherent trust from her to them.

I
t is worth mentioning that, thus far, these displays of trust occur between women. Remember that Naoto was essentially raised among men; Fuyumine and Magato are really the only family she has, and were most likely the people she interacted with the most growing up. Although she does appear to have a friendly relationship with Kiri, the owner of the restaurant Buon Viaggo, there is nevertheless an obvious absence of other women in her life.

This is not meant to downplay the important relationships Naoto fosters with men. However, I do think it is important to note that Naoto's relationships with other women are significant and unique in that they fulfill that missing intimacy. They are a different social experience altogether for Naoto, and only add to her growth and development as a character.

B
y allowing others to see her scar, Naoto is bearing her heart to them. The action is an indication of trust. When that choice is taken away from her, however—when her scar is revealed forcibly—it is a violation of her being.

Warning: The following contains mentions of sexual assault.
In Dogs: Stray dogs howling in the dark, Naoto is approached by Magato. The latter attempts to engage a conversation with her, but Naoto spurns his advances, clearly repulsed. The encounter escalates as Magato manhandles her and tears her shirt open, exposing the scar on her chest. Moreover, he physically touches it—something that readers have yet to see Naoto do herself.

What Magato does to Naoto is sexual assault and near-rape, if his last comments during the scene are anything to go by. Throughout the entire assault, Naoto is livid and, more importantly, visibly distressed whenever Magato gestures to her scar either physically or verbally. He violates not only her body but also the core of her being—her darker history, her past and everything tied to it. To have someone rip open that part of her and call her grief "a mark of mastery," something that "accentuates [her] beauty"—all these labels that Naoto clearly does not apply to her scar herself—is incredibly painful for her.

When I first read Dogs, I felt that this scene was entirely unnecessary. Even now it bothers me. However, I do think it is still important to address it, even if I do believe the ideas it suggests could have been told in a much different and far better way.

C
onsider how this scene is the first time Naoto's scar is shown in the series. The way the scar is introduced is a summation of what it is to Naoto. The scar is a source of pain, of humiliation—a reminder of the tragedy that befell her as a child. Most of all, however, it is something that nobody can understand but her. Its weight and its significance make the scar something that isolates Naoto from those around her. What this also means, however, is that while others, like Magato, can refer to it however they like, the only person who has any power over it in the end is her.

Will she forever regard her scar as a bitter memory? Or will it someday become the mark of a survivor, one that she will be proud to bear? That is only for Naoto to decide.