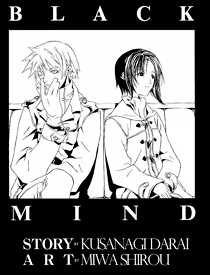 B
efore creating Dogs, Shirow Miwa worked on the one-shot, Black Mind. Although Miwa was in charge of the artwork and not the story, the latter of which was written by Darai Kusanagi, the one-shot shares several similarities with Dogs, including some character designs and names.

Of these similarities, one of Black Mind's main characters, Nao Sakurai, resembles Naoto quite a bit. When I first read the one-shot years ago, inspired by my interest in Dogs and Miwa's work in general, I was struck by how alike their designs are. Years later, I still find myself rather intrigued by the idea of Nao being a kind of "first draft" of Naoto—enough to dedicate a small corner of the site to it.

Again, however, bear in mind that Miwa seems to only be credited for the artwork, rendering the following observations to be more speculation than actual fact.

O
riginally published in 1999 in Ultra Jump by Shueisha, Black Mind tells the story of Yohane, a high school student who is actually a hitman for the government in secret.

In his latest mission, Yohane is charged with securing the ebola box, the smallest and deadliest biochemical weapon in the world. The object also happens to carry ties to the July End Society, a religious terrorist group. While on the job, however, he stumbles upon his fellow classmate and crush, Nao Sakurai.

Soon after, he discovers that Nao is affiliated with the July End Society and is tasked with killing him. However, she fails to perform her duty, seeming rather reluctant to do so, and the two part ways.

It is revealed later that Nao is only a part of the group because of her older brother, Mikio. After disagreeing with the direction the July End Society was going in, Mikio was taken into custody by its members and was experimented upon, resulting in him becoming unfeeling and machinelike. Ever since, Nao stays with the group for his sake.

The government manages to track down the July End Society and sends Yohane to complete the mission. However, he seems to only be interested in Nao and finishing her off himself. When he finally encounters Nao, however, she is with Mikio, and he and Mikio engage one another.

During their duel, Nao decides to kill her older brother, knowing that the Mikio she once knew is lost to her. Before she is able to act, however, another government official and Yohane's supervisor, Fuyumine, steps in and shoots him. Although weakened, Mikio wounds Nao, prompting Yohane to finish him off for good.

The mission concludes successfully. In the end, it is revealed that Nao survived. When she and Yohane reunite, the latter asks her to tell him about herself. They smile at one another, and it is shown that they now share Nao's winged earrings, each donning a wing on one of their ears. Emerging from the disaster together, they can now begin to move forward.

T
he most noticeable similarity between Nao and Naoto is their physical appearance. Although Black Mind consists of two chapters, making it difficult to really comment on Nao's wardrobe thoroughly, Nao still seems to don coats and high-collared garb like Naoto. The only difference is that Nao wears more fur-heavy collars than Naoto. They both also happen to sport the same haircut: short, black and parted to the right.

Below are images comparing the two. Because art styles can change over the years, I included images of Naoto from both Dogs: Stray dogs howling in the dark, published in 2001, and Dogs: Bullets & Carnage, published in 2005.

Although rather miniscule, their names resemble one another as well. In English, "Naoto" (直刀) means "straight blade." On the other hand, "Nao" can be written multiple ways and hold several different meanings. When deriving it from "Naoto," however, "Nao" (直) means "straight" or "honest."

In a way, their stories and personal histories also share similarities. Like Naoto, Nao seems to have lost her family, the only one left being her older brother Mikio. After he becomes a lifeless, twisted version of his former self, however, Nao realizes she has lost him as well, though it takes her quite some time to accept that fact. Alone with no family or friends to rely on, she ends up harboring a very nihilist approach to life. This attitude mirrors Naoto's own, though Naoto's reasons are more attributed to her lost memory than anything else.

Despite their melancholic personalities, however, there is still a kindness to their characters. Both Nao and Naoto are reluctant to harm others. Throughout Black Mind, Nao hardly engages in any sort of combat, and even when she is resolved to kill Mikio, she is unable to pull the trigger in the end. In contrast, Naoto is far more battle-inclined and also seems to be more experienced. Nevertheless, while she is certainly willing to fight when the situation calls for it, she also shows herself to be hesitant when it comes to taking lives.

Finally, the relationship between Nao and Yohane is a bit similar to Naoto and Heine's. Although the former pair is less hostile than the latter—aside from Nao's orders to kill Yohane, of course—these characters are able to bond with one another through their grim pasts. Because they share that kind of connection, they discover that they can relate to one another fairly well and end up growing as individuals as a result.

A
m I disappointed that Nao and Naoto are so alike? If not, should I be?

If anything, I think I'm happy that Miwa found himself intrigued with the character he created back then, and that his curiosity was so great that it prompted him to explore her further in a story of his own—if, indeed, Nao is the spiritual predecessor to Naoto. There is something rare and wonderful in loving something you create, and so I don't find myself holding ill feelings towards the idea of "reused assets" and all that.

Despite sharing similarities with one another, it is clear that Nao and Naoto are unique individuals in their own right. In the end, it's been a joy for me personally to read about both of them and to learn their stories.

A
part from Nao's resemblance to Naoto, here is a quick list of other similarities I noticed between Black Mind and Dogs that I thought were worth mentioning.